Meet the Witches of Toil and Trouble – Riata 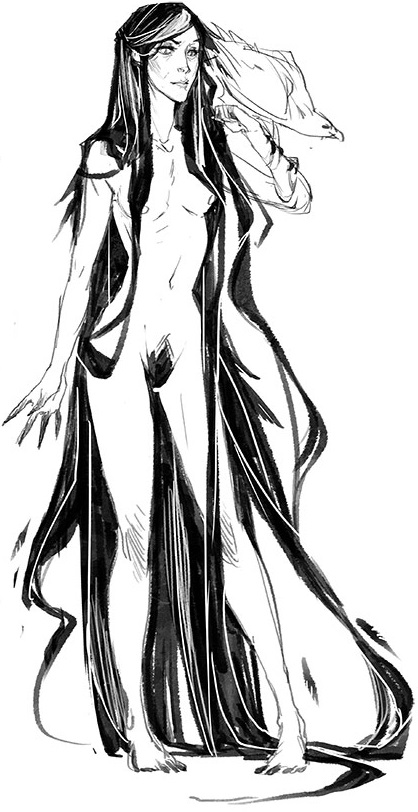 Last week we met Smertae, now let’s take a look at Riata,  who in the play is known as the “Second Witch”. Riata is the leader of our trio of witches and looks like she is in her forties so she has a more angular frame and some gray hair. All of the witches are tied to an element and Riata’s is air. We also wanted to play with the idea of the maiden-mother-crone cycle, so Riata is representative of the crone. Here were my initial character design directions: 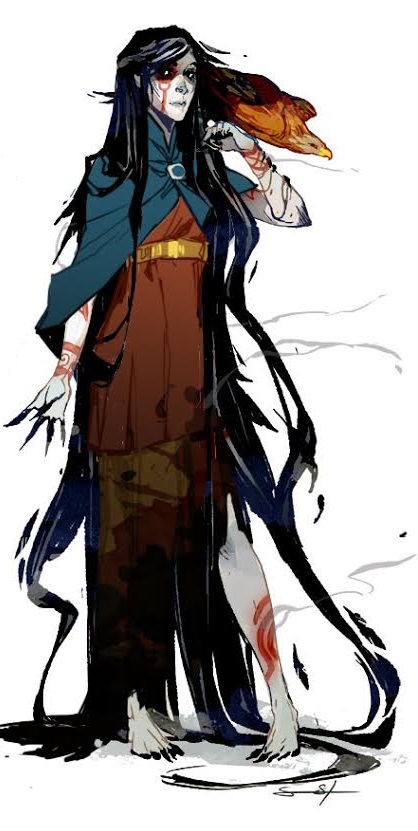 Riata’s a cold woman that sees four steps ahead of everyone else and loves nothing more than to move pieces on the chessboard. The kind of woman you always expect to have unusually pointed K9s. Her tattoos are red and angular.

Her familiar, Graymalkin, is a red kite (a type of hawk native to Scotland), always on the hunt. [Note: In folklore a Graymalkin refers to a cat or winged cat that served witches. But since the other familiars’ names don’t reference a specific design and since our familiars are shape-shifters, we made Graymalkin a bird most of the time.]

All of the witches are meant to have supernatural elements that set them apart from the mortal characters in the book. They each have tattoos or magical markings with Riata’s being done in red. I also wanted her tattoos to be angular and severe so I used a lot of reference material from wind burns and severely dried skin. I wanted Riata to look like her tattoos were made from her skin starting to break open. Riata also has blackened hands with taloned fingers like a bird of prey which sharpen and grow when she is angry or using her magic. As the book goes on, you’ll see this blackness creep up as if her skin is necrotic.

Dark hair, straightest. The most mature, and the tallest. Her frame can be almost elvish perhaps. Longer face and half lidded, cold, but beautiful piercing eyes. Pointed canines. Feathers break her silhouette, sometimes seemingly coming from her hair. Overly long nails like talons, stained black. Her tattoos could have the texture of burnt wood, like they are burns but not of flesh. When she casts, perhaps red flame or smoke bleeds from them.

Later when we added clothes, we researched what was being worn around the first and second century, which was also the time of the Celtic hero, Boudicca, who became a strong inspiration for Riata’s look. Since the witches are each from different time periods of Scotland’s history, their clothing became an essential clue to their history but it can be hard to find clothing reference from so long ago. Since Riata’s story also relates to the Roman Invasion and is closest in time to Boudicca, I was able to research her clothing by looking for articles related to what Boudicca would have actually looked like. Note: Riata would have likely worn plaid, but plaid is REALLY hard to draw consistently especially on non-formfitting clothes. Sometimes you need to compromise.

One of the coolest things about a character design is seeing how other artists interpret it. After Sarah designed the three witches, cover artist Kyla Vanderklugt and interior artists Kelly and Nichole Matthews had to bring that design to life on the page. The strong elements that were important to us from the start (her long hair, her tattoos and talon hands, her pale skin), are all noticeable in every incarnation even as little aspects may change with each artist’s style.

When the series opens, Riata awaits the return of Smertae, the witch she exiled to the sea years ago, while also preparing Scotland’s forces for a confrontation with Norway.

Riata believes that she has foreseen the path to the best fate for Scotland and needs her fellow witches Smertae and Cait to help her fulfill it. Riata hopes Smertae’s exile has proven to her that she needs to fall in line, because she needs to be able to trust the women at her side. As our story continues, Riata must face the darkness of her own past, even as she battles for the very soul of the land she loves.

Stay tuned for future posts about the designs of Cait, Macbeth and Lady Macbeth. Toil and Trouble will be available in stores and digitally on September 2nd and can be pre-ordered at your local comic shop with the form below or you can get a subscription at the Boom Studios website.