Netflix has just released the teaser trailer for Dragon Age: Absolution, a new animated series executive produced by me! I serve as the head writer and showrunner, with staff writers, Mae Catt and Tim Sheridan. It is beautifully animated by Red Dog Culture House with a stellar cast and crew! The show tells a new story set in the world of BioWare’s amazing Dragon Age video games.

And here’s the official press release with more info!

It’s been a while hasn’t it? What a crazy couple of years. We had a pandemic, my kid started kindergarten, I made a TV show and a trilogy of graphic novels, (more on those later), I injured my leg and couldn’t walk for a month, just wild times!

First, I wrote some Magic: The Gathering comics for Boom Studios! Magic: Master of Metal is a one-shot following the planeswalker, Tezzeret and Magic: The Hidden Planeswalker is a 4-issue series featuring Liliana and a secret new planeswalker. (Ooh secrets!)

The next big news is that I am co-creating a graphic novel trilogy with Pablo Tunica and Ariana Maher that will be released from Skybound Comet. Sea Serpent’s Heir tells the story of Aella, a young girl who dreams of adventure, but discovers her future may not be as bright as she hoped. Turns out, she is the reincarnation of the demon Xir, and she is destined to destroy the world! Sea Serpent’s Heir Book One: Pirate’s Daughter will be released in October 2022, and books two and three are already in the works!

Finally, I have spent the last few years writing and producing my own animated television show. But we can’t talk about it just yet. Look for a big announcement this summer. (Sorry, I just had to tease you all a little bit.)

And on a bit of personal news: I have decided to spend less time on social media and have deactivated my Twitter and don’t really use Facebook anymore. The best way to keep up to date with me will be this site and my newsletter (which I will try to update more often). You can also reach me through the contact section of this site and business or media inquiries should be sent to my representatives at Archetype.

Thanks everyone and have a great May!

No, the title’s not a mistake. I’ve branched out of my comfort zone and recently wrote some shorts for Sanrio’s new Hello Kitty and Friends Supercute Adventures YouTube series. It was a great experience and felt like I was giving a gift to everyone struggling to stay positive in 2020 (including myself). If you need a little more serotonin in your day, you can watch them on Youtube here:

In this story, that I co-wrote with Ernie Altbacker (thanks Ernie always nice to work with you), The Justice League recruits the Justice League Dark and decides to take the fight to Darkseid once and for all. But can anything prepare them for Apokolips?

The movie is now available for digital download and will be available on BluRay and 4K Ultra HD on May 19th.

I’ll be attending San Diego Comic Con from July 18th through July 21st. Thursday, Saturday, and Sunday are my big panel and signing days (specifics below). Friday, I don’t have anything on the schedule (that you know of!) but if you want anything signed feel free to reach out on Twitter and I’d be happy to try and meet up.

See you in San Diego!

10am – Grand 10 & 11, Marriott Marquis San Diego Marina – They Look Like Me: Bodies in Nerd Culture panel

I have had the honor of helping launch this new franchise by writing a movie, a 22-minute animated special and a series of shorts that are all available to watch on the Marvel HQ Youtube channel.

Start with Marvel Rising: Initiation, a series of animated shorts, which introduce Gwen Stacy, aka Ghost Spider, as she tries to clear her name by catching the criminal who framed her for the murder of her best friend. Along the way she’ll meet new super heroes, Squirrel Girl and Ms. Marvel, and S.H.I.E.L.D. agents, Quake and Patriot.

Then watch Marvel Rising: Secret Warriors, a full-length animated movie, which follows Ms. Marvel and Squirrel Girl, as they discover a secret Kree plot to take over the world with Inhuman soldiers. Along the way they’ll need to recruit Inferno and America Chavez with help of S.H.I.E.L.D. agent Daisy Johnson, aka Quake, and her partner, Patriot. Together, they’ll form the Secret Warriors, Marvel’s next generation of heroes.

Finally, watch Marvel Rising: Chasing Ghosts, a 22-minute animated special, where Ghost Spider returns to action hot on the heels of her nemesis, Sheath, but finds that she’s not operating alone, Sheath’s’s teamed up with Exile, a powerful Inhuman. When the Secret Warriors show up chasing Exile, Ghost Spider will have to learn to work with the team of young heroes to defeat them and possibly clear her name with the chief of police, Captain Stacy, her estranged father.

It’s been a joy writing Marvel Rising. I can’t wait for you to see what I have coming up next. As always you can keep up to date with my work by subscribing to my newsletter or following me on Twitter. Until next time…

These six shorts will introduce some of the characters appearing in the feature length animated movie, Marvel Rising: Secret Warriors. I am so thankful for the opportunity to write these shorts and the movie.

Watch the trailer below and check out Entertainment Weekly for more info about Marvel Rising.

I’m heading down to San Diego Comic-Con this month and that means getting to play my favorite road trip game: Marvel Music Mash-Ups! It’s not all actually Marvel songs, but you put on a random song playlist and try to decide who each song is about. For example:

Broken – lovelytheband – This is definitely Ash and Michael from Star Trek Discovery (Just be together you two!!!). The appeal to embrace your imperfections, the allusion to a family/community that’s all around you but somehow a little separate from you, it all works for me.

Anyway, feel free to tweet me your favorite mash-up. And once you get down there drop by and say ‘hi’ at one of my events below: 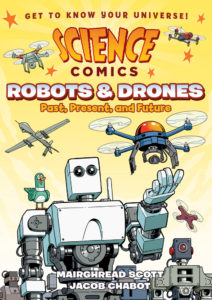 That’s right, everyone! My newest book with amazing artist Jacob Chabot is now available pretty much everywhere books are sold. That means you can get it right now at your local book store, or visit my publisher’s site where they have links to a bunch of book sellers. A lot of libraries will have it too.

I just want to say thank you to my team at First Second, Dave, Gina, Mark, Calista, Robyn, Kiara, Andrew, Molly, Rob, John and Stephen for helping get this book published. Thank you to the incredible Jacob Chabot for bringing all my crazy ideas to life on the page. Thank you to our expert consultants James and Sabina, who answered all my tough questions. Finally, a huge thank you to all the librarians, teachers, and parents who help kids discover science through Science Comics.

Now, what are you waiting for there’s a whole book of robots to go read about, get to it!