You are browsing the site archives by month.
31Jul 2015 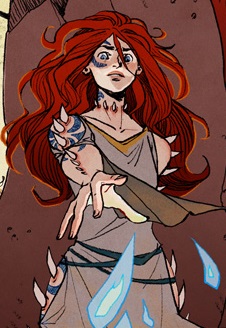 Toil and Trouble available for Pre-order!

My creator-owned series The Third Witch is now called Toil and Trouble. Same great book written by me with amazing art by Kelly and Nichole Matthews, but with a new title.

Click here for a printable version of the pre-order form.

“But Mairghread,” you might be wondering, “what is this comic all about?”

Toil and Trouble is a perspective adaptation of the classic play, Macbeth, by William Shakespeare. This comic series tells the story of Macbeth from the perspective of the three witches who appear early in the play to deliver a prophecy that Macbeth will soon become king of Scotland. In this story, readers follow Smertae, Cait, and Riata, the fates of Scotland, as they battle each other for the soul of Macbeth and the future of their nation. This is a supernatural horror tale that utilizes the comics medium to delve deeper into Shakespeare’s play and tell an entirely new story.

Pre-ordering is a great way to make sure you get the book, but it also tells stores that this will be a popular book. So if you are looking to support books that you enjoy, make sure to pre-order.

Toil and Trouble will be available on September 2nd. Over the next couple of weeks I’ll be posting some cool behind the scenes looks at the characters, art and writing process, so stay tuned.

Hello! We are just a few days away from San Diego Comic Con 2015. Below is my full schedule for all 4 days with panels and signings. Come by and say hi!

The face of comics is changing. A diverse panel examine what indie/web publishing has been doing right, how mainstream comics can catch up, and what creators and fans can do to be heard. Moderator Amy Chu (Girl’s Night Out) leads panelists Mairghread Scott(The Third Witch, Lantern City), IDW Publishing editor Sarah Gaydos, Derek Charm (The Powerpuff Girls: Super Smash-Up!), Dr. Andrea Letamendi (The Arkham Sessions podcast), Christian Beranek (Validation), and BOOM! Studios brand communications manager Christine Dinh in a sincere, thoughtful discussion on the topic of gender, diversity, and representation in mainstream comics.

From Windblade and Arcee to Strongarm and the brand-new Combiner making her debut at SDCC, female Transformers characters have finally gotten their due; but behind the page and in fandom, even bigger changes have been happening. Panelists include Transformers comics writers Mairghread Scott and Georgia Ball, artists Corin Howell and Sara Pitre-Durocher, Hasbro’s Sarah Carroll, and special guests.

2015 marks the 10th year of publishing for BOOM! Studios, a multiple Eisner Award-winning top 10 comic publisher. BOOM! is looking ahead to the next 10 years and how everyone can push comics forward. Moderated by BOOM! president of publishing and marketing Filip Sablik and featuring editor-in-chief Matt Gagnon, Mark Waid (Strange Fruit, Irredeemable), Asaf Hanuka (The Realist), Mairghread Scott (The Third Witch, Lantern City), and James Tynion IV (The Woods, Memetic, UFOlogy), panelists highlight the changes in the industry and what they want to see in comics.

All-ages comics are important now more than ever in helping to bring in new and lapsed readers, from practically every demographic. BOOM! Studios associate editor Whitney Leopard leads a discussion on the significance of all-ages comics, from what they have achieved thus far to what lies ahead, with creators Mairghread Scott(Transformers: Windblade), Thom Zahler (My Little Pony: Friendship Is Magic), Aron Steinke (The Zoo Box), Ian McGinty(Munchkin), and Dave Roman (Astronaut Academy).

Hope to see you there!