Meet the Witches of Toil and Trouble – Cait

Actually, I wanted to take a moment and say this was a special concern for me with Cait because she looks so young. The idea of the Maiden, the Mother and the Crone were crucial to our design concept, so Cait really needed to look young to fulfill that part of the trinity. But while we never intended to treat her in a sexual manner, I’ll admit I was kept up at night by the prospect of being called a child pornographer. I want to tip my hat to Sarah Stone for doing such an amazing design of Cait that kept her from feeling at all sexual, even fully naked. These are the kinds of struggles you have when you’re making art.

Anyway let’s take a closer look at Cait,  who in the play is known as the “First Witch”. Cait is the peacemaker in our trio of witches and looks like she is a pre-teen girl despite actually being the oldest of the witches. All of the witches are tied to an element and Cait’s is earth. We also wanted to play with the idea of the maiden-mother-crone cycle, so Cait is representative of the Maiden. Here were my initial character design directions:

Colors brown skin (like soil), pale hair, black tattoos like vines creeping through her skin. Younger than Smertae and almost childlike with a teen build, Cait is wide-eyed with hair like a tangle of branches which leaf, bloom and shed their leaves throughout the story. Quiet, Cait sees much and says little. She’s often the last of the group to make a move, slow to change and to anger and wary of making a misstep.

Her familiar, Paddock, is a black adder and usually coiled around her, preferring to stay in close physical contact whenever possible.

All of the witches are meant to have supernatural elements that set them apart from the mortal characters in the book. They each have tattoos or magical markings with Cait’s being the tree branches that grow directly out of her skin. It was decided early on that these branches would almost be like the horns or antlers of an animal so you’ll notice a stag-like quality to them.  Graves from the time period she lived in (around 6,000 BCE) show that animal pieces were buried with people and I liked the idea that Cait might have been buried with a pair of antlers on her head a la the Celtic deity, Cernunnos.

Blonde hair, perhaps so light it’s almost white. Frizzy, tighter curls that loop around branches and leaves. wide, large golden eyes or maybe darker eyes, to seem more faun-like. Branches almost form antler-esque silhouette perhaps? There can be three prominent ‘horns’. most childlike proportions: small breasted and a petite frame. shortest. Branches envelop and even appear to grow under her skin in some places. Her snake familiar can coil around her and her branches.

Later when we added clothes, we looked at the furs and leathers being worn in the Neolithic era. The cut of her outfit is based off the clothing found on a Neolithic man in the Alps. I noticed it had a very similar design and material make-up to traditional Inuit clothing, which is where we got the idea for the contrasting color stripes. We wanted something that would show off the branches growing out of her arms and legs, so we took away the leggings she probably would have worn and rounded out the outfit with some Neolithic jewelry. 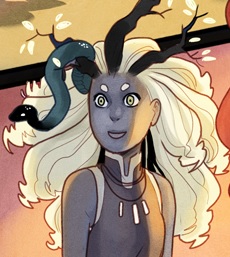 One of the coolest things about a character design is seeing how other artists interpret it. After Sarah designed the three witches, cover artist Kyla Vanderklugt and interior artists Kelly and Nichole Matthews had to bring that design to life on the page. The strong elements that were important to us from the start (her branches, her darker skin, her child-like appearance), are all noticeable in every incarnation even as little aspects may change with each artist’s style.

When the series opens, Cait awaits the return of Smertae, the witch that Riata exiled many years ago, and she hopes that Riata and Cait can reconcile. She sees the others as her family and wants that family to be happy and whole once more.

Cait believes that the witches must unite in order to watch over Scotland. As our story continues, Cait must try to keep her fellow witches in line as they battle over the heart of a king and the soul of a nation.

Stay tuned for future posts about the designs of Macbeth and Lady Macbeth. Toil and Trouble will be available in stores and digitally on September 2nd and can be pre-ordered at your local comic shop with the form below or you can get a subscription at the Boom Studios website.